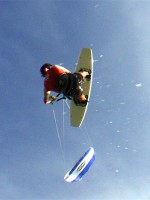 Flat water jumping will even the playing field somewhat by allowing all of the kitesurfers to have fun practicing advanced aerial moves without having to be at some of the perfect spots on earth with the perfect wind and wave combinations.

The following equipment and conditions are recommended for jumping:

Similar to windsurfing, it is very easy to jump in wave.  You only need to approach the wave with some decent speed.  The momentum of the board will get you air born once you pass the lip of the wave.  In the case of kitesurfing, you need to move the kite up (70 to 85 degrees vertically) when approaching the wave otherwise the down wind force of the kite will make you jump horizontally more than vertically.   If you move the kite up just before hitting the lip of the wave, the upward momentum of the kite will make you jump much higher than a windsurfer on the same wave.

Flat water jumping is much more complex than wave jumping.  As there is no ramp to send you skyward, you need a very strong force to lift you out of the water.   To jump in flat water, you simply send the kite upward/backward (85 degrees vertically backward) while continue to move your board forward.  When that happens the combination of the following forces will send you skyward:

Once being air born, the kitesurf need to move the kite from 85 degrees vertically backward to 70 degrees forward.  Such movement will create a "pendulum" effect that will sustain the air time of the kitesurfer and also prepare the kite for landing.

To jump, you need to be in a powered up situation where you can lock the kite in at 60 degrees vertically or making a small sine wave between 45 to 75 degrees vertically.   If you have to make a larger sine wave, you simply don't have enough power to jump.

When you first learn flat water jumping, remember to keep your inputs small such that you don't over turn the kite which could lead to some drastic situations (too backward a jump or too fast a landing)

Let's take a look at a photo sequence of a very basic flat water jump.

These photos were taken by Jan Pina for the Kitesurfing School web site.

So you have learned how to kitesurf, to go upwind, to jump and to do some tricks but your landing is still  sometimes very rough.

Smooth landing in kitesurfing is somewhat optional; however, for kitesnowboarding it is essential unless you want to break some of your bones.

This page will help you to reduce the pain you may have while kitesurfing (especially kitesnowboarding) and set the stage for more elegant tricks (many kitesurfers can do many interesting tricks but only some can do those and land smoothly at the same time).

To land smoothly you need the following:

·         The kite should lift you up more vertically instead of horizontally.   Imagine the wind window is a quarter of a sphere with you at the center.  Now on that sphere, draw the line that the kite travel when you turn it upward/backward while jumping.  Try to find a line that provides the least horizontal force with the most vertical force.  You will find that such line should be in the top portion of the sphere.

·         The kite should have sufficient power to keep you planning upon landing.   This means that the kite should be flying from zenith to the forward wind window when you land.

·         You should be pointing you board slightly downwind (broad reach) upon landing.  It is easier to land going with the force instead of going against the force.   The more horizontal force the kite has when lifting you, the more downwind you have to turn your board (also the harder to land smoothly and elegantly)

Use the following steps to land smoothly:

·         While planning, move the kite slowly up to around 70 degrees vertical in the forward direction.

·         Go slightly downwind to gather speed to prepare for the jump.  Lean back to counter the vertical lift of the kite.

·         Turn the kite upward, backward to around 80 - 85 degree in the backward direction.  For the first few tries, you may want to look up at the kite to make sure it goes where you want it to (as long as you don't let your board slide downwind).

·         Turn your kite again to make sure it travel from zenith to forward when you land.

·         Align your board such that it points slightly downwind.

Keep on practicing these steps until you can land smoothly consistently most of your jumps (90% or more).

The Condition and Adjustment

The elements that guarantee smooth landing are the way you fly the kite and the way you points your board upon landing.  For the kite to lift you up by flying a somewhat "short distance" from 11 o'clock to 12:30 o'clock requires that you must be in a powered-up condition.

In a non-powered-up condition, the kite needs to travel a longer distance to generate enough lift for jumping and normally has to travel from a lower position to 12:30 o'clock.  This will generate more horizontal force and make it harder to land smoothly consistently.  In such case, you need to point the board more downwind upon landing (however, the fast horizontal travelling speed makes smooth landing harder than in a power-up situation).  If you are not pointing your board downwind enough, the momentum will cause you to face-plant forward.  This is where a finless board may be useful as it can land in any direction (forward or side way)

Once you start applying the technique described above to consistently land smoothly, you will also find that by using more the vertical lift and less horizontal force of the kite before jumping, your jumps are also consistently higher.

The other bonus is that since your kite does not have much horizontal force, you are much more "stable" in the air and can focus more on the tricks you want to do instead of balancing yourself against the horizontal force of the kite.

Does anyone have information about this site goodstome.com ?